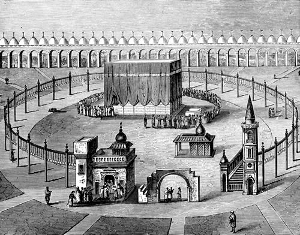 Kaaba a Hindu Temple?
[Note: A recent archeological find in Kuwait unearthed a gold-plated statue of the Hindu deity Ganesh. A Muslim resident of Kuwait requested historical research material that can help explain the connection between Hindu civilisation and Arabia.]
Was the Kaaba Originally a Hindu Temple?
By P.N. Oak (Historian)
Glancing through some research material recently, I was pleasantly surprised to come across a reference to a king Vikramaditya inscription found in the Kaaba in Mecca proving beyond doubt that the Arabian Peninsula formed a part of his Indian Empire.

Email ThisBlogThis!Share to TwitterShare to FacebookShare to Pinterest
Labels: பக்தி